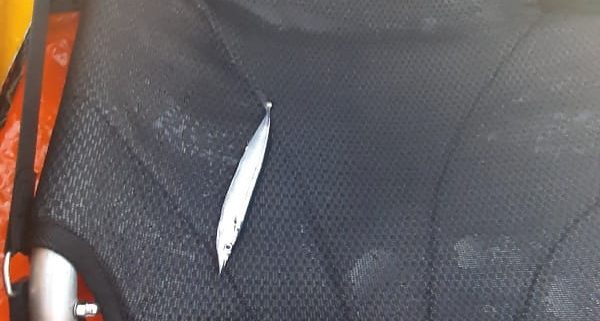 A cuppa java, the rising sun and the thought of endless hours of paddling. Wouldn’t that get your juices flowing?

Slap on some sunscreen.
Leggings and armies on.
Hat and gloves on
Safety harness on.
Sunnies on.
Hatch open, safety line clipped on.
Washboards out.
Jump out. Turn around.
Close washboards.

Sit down…..stop, wait! There is something sitting on my seat.

First off was a skinny little fish who thought it could fly or for whatever reason had taken his last breath and was just lying there. 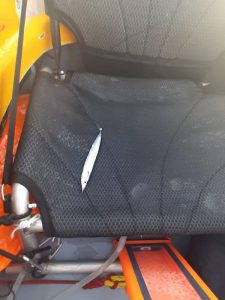 Next it was the smallest crab. This fella was about the size of my baby fingernail. It was the white /pink colour of a prawn. It was sitting in the dead centre of the seat just staring at me through two tiny blue dots that must have been its eyes.  I vaguely remember reading about crabs that drift across oceans and land where they may or get eaten on the way. Maybe that’s what the Storm Petrels are doing when inflight.

Then this morning’s visitor was one of the flat plate blue bottles. I gave the seat a good rinse to make sure nothing was left behind to sting my backside.

We are in the Trade winds now. 12 to 15 knots from the SE. Puffy white clouds and a calmer sea state.

When loading Osiyeza I packed my food into 11 piles. Each pile is meant to be enough calories for a week. So, enough food for 77 days, give or take. Each pile then got tossed into a waterproof bag and these got dumped into the aft locker which is behind my seat. The hatch cover has the big white satellite antennae attached to it.

The idea is at the beginning of a new week I would fetch a bag and unpack it into the cabin and the rubbish from the week before would go into the dry bag and back into the aft hatch so it can be correctly disposed of when I reach Brazil. I have always been conscious about our waste and keeping it out of the ocean. It reminds me of a crossing and a stop off at St Helena Island.

After doing all the formalities it was customary to go to Anne’s place for a meal ashore and a few good English rum and coke, if there is such a thing. We would take our trash ashore and put in one of the bins proud that sometime in the future this would make a young child called Greta very pleased.

We were there for a few more days waiting for the RMS St Helena to arrive from Cape Town to bring us a new glass sliding door that fell victim to a flying beach bat during an intense game of table tennis inside the salon of the Catamaran. True story! Circa ’95.

We took a dingy ride around to the NW side of the island to explore a bit. On this side of the island there was what can only be described as a land slide of garbage and at the top was a bulldozer pushing it over the edge into the sea. Out of sight out of mind. I am sure this practice no longer takes place.

Bird of the day spotted a few days ago but could not ID until today, the Artic Tern. In breeding plumage its bill goes from black to red. There is even record of them migrating from the South pole all the way to the North pole and back. Quite fascinating stuff. (Google makes me this clever)

No of smiles: 13, total raised R73,667. Thank you to everyone for your generous donations to Operation Smile SA.

Day 7: Bucket Over Board aka BOB