Blog - Latest News
You are here: Home / Blog / Day 7: Bucket Over Board aka BOB

In this case BOB. Bucket overboard.

The wave swept over the back deck, over my head, flooding the cockpit and splashed up against the washboards. With its dyeing momentum it slipped up and over the top washboard and sloshed into the cabin. Out the corner of my eye I glimpsed something red. Dam salt water in my eyes. I wipe them with the back of the paddling gloves and look to my left.

The red bucket (washing up bucket) had been washed out of the flooded cockpit and was floating in the ocean next to me. I looked at it for a second a little confused as to what had just happened. As I reached out to grab it a little wave tilted it away from me and I missed. Oh no! Try again. Too late.

It was now out of reach and Osiyeza was not going to wait. She had other things to contend with. First to empty the flooded cockpit. This is done with the help of gravity via a large drain hole that goes right through the hull just like a drain plug in a bath.

My next priority was to see how much sea water hopped over the washboards. I peered over the top and into the cabin. It was wet inside but in volume it was not much.

Still having not seen the housekeeper I was forced to mop up down below. I did such a good job that I rewarded myself with a long lie down. Truth be told having my head below my waist is still not ideal.

This was not the only flooding of the day. The second one was my fault entirely but there are those who will blame me for the first one because I had left the main hatch open. Fair call, I guess.

I had just finished making drinking water and had stepped outside to fetch the other daily water bladder.  Watch the video now on my social media accounts! 🎞🎦

I have 10 of these three litre bladders on board. (Thanks to Tripper Sports). 8 are stored below as emergency water rations. One I have in the cockpit under the seat to drink while paddling and the other inside under the cockpit which I use for cooking and coffee.

Back home we use these bladders when we race mostly long distance either on the rivers or on surf ski’s. The one golden rule it to make sure the clip sealing the pipe off is closed when not in use. There has been many a shocked and depressed paddler after putting the pipe in their mouth to find there is no juice left. It’s all run out because the clip came undone! This is exactly what happened. As I stepped out, I must have stood on the clip forcing it open spilling 2L of precious water.

I have been at sea for 7 days.

I have managed 370nm/684km as the crow flies.
Yes, I am tired, stiff, and sore but it becomes insignificant when I look around me and see my dream unfolding.

PS it may have taken a while but I found the second mobile phone without the housekeepers assistance.🧐 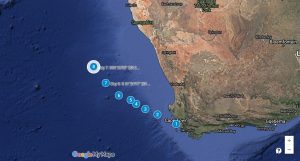