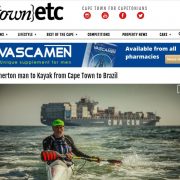 Behind every great adventure is a team of people who help to bring the adventure alive. I am extremely lucky to have some great people and corporates supporting my dream.

Treble Group is a sports marketing and event management agency who are playing an enormous part in managing the project, from securing the much needed financial support and sponsorship to get the adventure off the ground, to managing the ongoing media and digital presence, helping me to build the brand.

The Treble Group is excited and privileged to have secured the premium publishing house, Highbury Media, as official media partner to Richard Kohler’s Ocean X adventure.

Highbury’s award-winning expertise in print and digital media communications will be integral in building the media presence for this incredible journey. Their team have already built and designed Richard’s website. The website allows fans and followers to stay up to date on Ocean X’s latest news. In addition, they will also assist with content generation. This will be leverage through their extensive digital and print magazine portfolio on the highly popular Cape Town Etc and Sports Club platforms.

Richard’s Ocean X adventure is a story about endurance, courage against the odds, and the indomitably of the human spirit. It’s a story that needs to be told. Which is why Treble is excited to partner with Highbury in documenting every stroke of Richard’s mammoth task.

If you would like to get involved with Richard’s Ocean X paddle from Cape Town to Brazil you can contact the Treble Group [email protected] or find the sponsorship opportunities here. 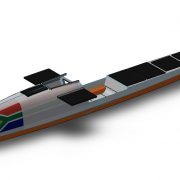 My unique ocean-crossing kayak needs an electrical source to power its numerous electronics required for me to achieve this heady task awaiting me. The biggest consumer of electricity, which is the most important aspect of my journey, is the water maker. Electricity can be generated using solar panels or wind generators. 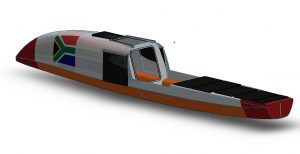 As there are so few kayak crossings, my research focused on ocean-rowing boats. I found that the majority of them experienced some sort of power problem during their crossings, so I need to ensure that I avoid similar issues.

The power generation and storage system for crossing has been designed by Tiaan Oosthuizen, a Tshwane University of Technology Solar Team Member & PhD student. Tiaan has studied the average sunshine for the past 22 years over the entire route I will be paddling. He has based the power generation requirements with this data against the power consumption expected by the electronics on board. Isn’t science and technology just great?

The daily average sun yield will decrease by almost half the closer I paddle to Brazil. When I leave Cape Town’s shores, there should be about 3kWh/day reducing to 1,8kWh/day near Salvador. The solar system I will be using is meticulously designed with a worst-case scenario in mind. Safety first!

Solar Panels are often used for electrical generation in rowing boats, and reliably produce energy for its systems. However, in foggy, overcast, or rainy conditions their output is significantly reduced. Considering the nature of this kayak and the limited space available, flexible solar panels are best suited for my daily requirements.

Performance is in direct ratio to cost, and unfortunately they are not cheap. A unique design departure that will dramatically increase solar power output are the two lifting and tilting side panels on the front compartment. Total solar array is 380watts. 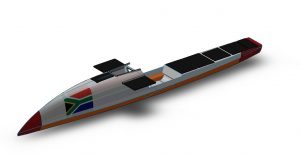 Cost for cost they can produce more energy than solar panels. But of course they rely on steady winds and should be mounted as high as possible to get the least interrupted wind.

On a small kayak the main concerns are the weight and resistance of a wind generator and the negative effect this has on the stability of the boat. Considering that the average winds are expected to reach 12 to 15 knots, less my kayak speed, will give me an average of say 10 knots (5.2m/s) of wind. Looking at the graph below it is evident that there is not enough wind speed for efficient use of a wind generator. 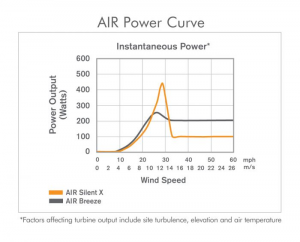 A maximum power point tracker (MMPT) is an electronic DC to DC converter that optimises the match between the solar array (PV panels) and the battery. To put it simply, they convert a higher voltage DC output from solar panels down to the lower voltage needed to charge batteries. MPPT controllers are 93-97% efficient. The charging information will be available to me via a Bluetooth app.

It is necessary to store the energy from the solar panels or wind generators and this will be done using two 12V 100ah LiFePO4 batteries. Traditionally marine deep cycle lead acid batteries have been used, but they only allow a maximum of 50% discharge and ideally as little as 20%. This would require at least twice the battery capacity compared to lithium-ion phosphate (LiFePO4). LiFePO4 batteries can be discharged to a much lower state of charge without damage. However they do come with a hefty cost penalty.

The two 12V 100ah LiFePO4 batteries come with a built-in BMS. It is the brains behind battery packs. They manage the output, charging and discharging, while also providing notifications on the status of the battery pack. They also provide critical safeguards to protect the batteries from damage.

Controlling the over and under voltage, overcurrent and short-circuit protection, over temperature and cell imbalance, the BMS monitors the battery to ensure safety and maximum lifetime over the full range of operating conditions. Most importantly, everything I need to ensure I remain hydrated! Water = Life.

Below is an overview of the power system 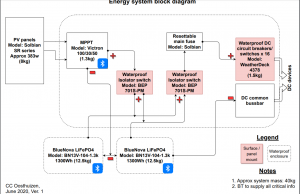 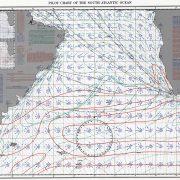 The mammoth challenge that awaits me as I mentally prepare for my Ocean X odyssey offers a rather simple, yet complex question: when is the best weather and correct time to kayak across the Southern Atlantic?

It would be virtually impossible to kayak across an ocean if the elements are not in your favour and the most important weather elements to consider are the winds and currents. Failing to prepare leaves me with no option but to prepare to fail and even that theory can be quashed by the sudden change in the elements of Mother Nature.

The Southern Atlantic Ocean is dominated by the South Atlantic subtropical high pressure, which basically sits over the middle of the ocean. In the centre of the high pressure there are generally calm winds and variable winds. Moving outwards the wind speed and direction become greater and from a more constant direction

I’ll be departing from Cape Town and those who live and grew up in the fairest Cape know that during the winter months the cold fronts (low pressure systems) bring the north-westerly winds that create big sea swells and lots of rain.

The direction that I will be heading on my journey from Cape Town to Brazil is in a North-Westerly direction so trying to paddle into a headwind during the winter months would be futile. I’d be wasting a lot of time and energy for hardly any gain.

During the summer months though, the opposite happens as the South Atlantic high moves South and pushes the cold fronts downwards and away from Cape Town. Summers here in the Cape are normally dominated by the South Easterly winds that blow in the direction that I want to pursue in achieving my Ocean X dream.

A week after leaving Cape Town it is highly likely that I will move into an area of consistent South Easterly winds known as the Trade Winds. These winds blow in an arc around the high-pressure system, thus helping me towards Brazil.

The ocean winds are also the main driving force of the ocean currents and they generally follow the direction of the winds, so waiting for the summer months will again work in my favour. ‘Timing is everything’ as they say in life.

One thing about ocean currents is that they do not move in a perfectly straight line. There are lots of what is termed as ‘eddies’, which is a circular current of water. It will be very important for me to not get stuck in the bogey counter-currents known as ‘eddies’.

When sailors – and now kayakers – plan for an ocean crossing, they use what is known as routing charts. There are routing charts for every month of the year, which indicates the average conditions that could be expected for a given month using empirical recorded data over the past 20 years. 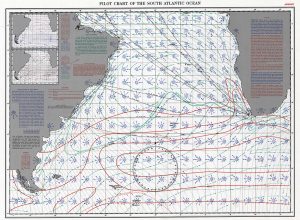 On the right-hand side of this chart there are detailed overviews of the temperature, wind, visibility and the wave heights. 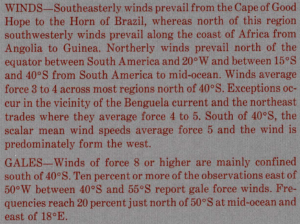 As you can read from the image above of the wind description, the South East wind is the most dominant between the Cape of Good Hope and the Horn of Brazil – a good time to be kayaking over 6000kms across the ocean!

A routing chart also includes several smaller inserted charts as seen in the image below. 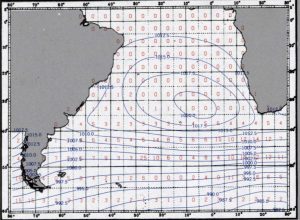 As you can deduct from the gales and pressure the red numbers in the centre of each square show the average percentage of ship reports in which winds of at least Force 8 have been recorded. The blue lines show the average barometric pressure at sea level. 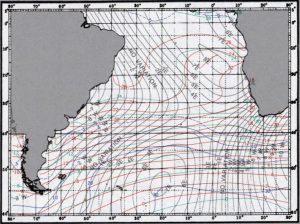 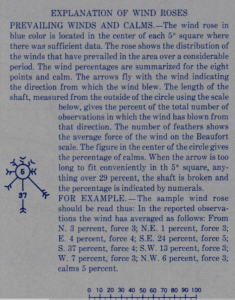 Every 5 degree square on the routing chart includes a Wind Rose. Above is the explanation of the Wind Rose. A cursory glance of the Wind Roses between Cape Town and Brazil show the South East arrow is the most dominant, which compares with the general wind description as indicated earlier.

But if you take a closer look at the Wind Roses around Cape Town you will notice there is a fair amount of wind blowing from other directions. 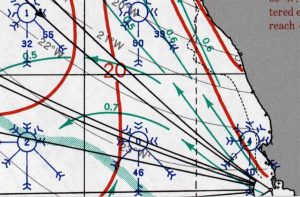 The most problematic wind for my departure would be the South West and Westerly winds, which could potentially blow me on to the shore wreaking havoc before I have even left the fairest Cape!

I will have to wait for a weather window that has about five or six days of Southerly and South East winds that will enable me to get North / a little bit West, so if I do encounter any winds from the West I would have made enough sea room to keep me from being blown on to the shore.

The other thing to note are the thick red lines that indicate the percentage frequency of having wave heights greater than 12 foot.

This brings me back to the beginning where I posed question: when is the correct time to kayak across the Southern Atlantic?

It would be virtually impossible if the elements are not in your favour and the window period for me to achieve my ultimate goal is December to the end of February when I can look forward to catching that treasured glimpse of South American land.