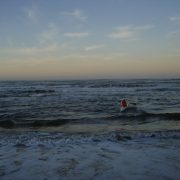 Tuesday 23rd October 2012 we made the 42km from Alexander Bay to Holgat River.  So how did I feel after a 5hr paddle. Well a lack of on the water training, lack of time spent setting up my new Fenn Swordfish, lumpy sea, very cold water and an increasing head wind left me a little frustrated when I eventually washed up the beach just before midday.

That night we were allowed to camp at the secret Holgat camp site which is a few km up the river gorge without security baby sitting us. They actually put an old lock onto the main gate and gave us a spare key and asked us to just throw the key away when we leave! Unheard of!! So we have to give the Alexkor security a massive thumbs up for everything they have done for us especially Liuwelyn and Frans Ruiters. Oh yes, we were also told not to drive around or we might get shot! ?

What a fabulous place to camp. A night out under the stars.

It was up a 5am to be on the water by 6am, a few minutes before sunrise. The sea had calmed down a lot. Not knowing exactly what the days wind forecast was I tried to take a closer conservative line to shore. Around 8am the wind suddenly switched to a hot but strong offshore wind. At this time I was going outside one of the many reefs and had to dig deep to get back inshore to avoid being blow out to sea. It stayed this way till about the last hour when it faded to nothing.

Close to Port Nolloth I passed a few diamond boats doing their stuff. I came along side one just to say hello. They asked the obvious question, “where did you come from?”. After telling them the one chap just shook his head and said “jy’s [email protected]$%ng mal” turned around and carried on working. Go to love it.

Got the 38km covered in just over 4hrs. I tried a 1mm wetsuit top that The Paddling Centre had given me, to try and combat the cold water. WOW! What a difference it made. Can’t understand why we don’t wear them more in the Cape. Especially on the late evening downwind paddles.

So as I sit here writing this the wind has switched to the North I wish I could get a few more hours in today to make some use of this wind but the next point South that I can get out at is Kleinsee which is still 56km away.Yesterday we are in the comfort of the Bedrock Lodge overlooking the harbour courtesy of Freddie.

Today I hope their will be some of this North wind left. The plan right now is to paddle off around 05h30 mist permitting and see what happens. 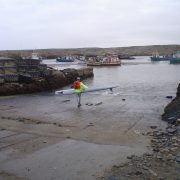 My Surf Skis finally arrived on Thursday late afternoon after a 3 week wait which delayed our departure by 6 days. I headed off early on Friday morning to fetch my “seconder” – Paul Brouwer en route in Darling. Paul will be looking after me till the middle of November when I hope to in or around Cape Town.

The drive up to the Orange River was an 800km mixed bag of conditions. Rain storm in darling- hail storm near Springbok and then hot dry conditions at the end. Arriving in Alexander Bay is a little depressing. The town is slowly fading away but the people here are warm and welcoming.

Looking for the weather window

Our first order was to find our guest house, Af en Toe. It’s an old 9 bedroom communal house which we have all to ourselves. Our second task was to get down to the harbour and check out the sea conditions. Access to the harbour is restricted as it is in the mine area. After a few calls we hopped into a mine security vehicle and were driven down to the harbour. All the diamond dredging boats were safely hiding away in the harbour with the sea pounding 5m swells into the coast. Every now and then a wave would close out across the entrance! Certainly not what we wanted to see.

I decided that we will have another look on Saturday morning and try and give it a go. Back to the guest house for a plate of spagbog ala Paul and a good night rest. We had arranged a security vehicle to escort us and the Land Rover to the harbour at 8am. No need for an early start with only a 12km paddle ahead. Thankfully the wind had not started blowing but the swell was still thumping. Keen to get the paddling on the go I decided to give it a bash.

Wow what an experience!!!

I am not shy to admit I was “crapping” myself as I paddled out of the harbour and don’t remember paddling in swells this big before. The waves I counted 10 seconds to go up and down the other side. I made a beeline for the deep sea to stay away from the rogue swells that had their tops cresting and breaking. Getting hit by one of these would have been disastrous. From my GPS track I worked my way 2km off shore before heading North. At the top of each swell the wind would suddenly gust strongly offshore. This is caused by the air the wave displaces as it moves forward. Freaky!!

Paddling to the Namibian border

I paddled 7km to the Namibian border before turning around and heading south. The way back I could follow my GPS track which was comforting. By this time the vis had improved and I was feeling excited. Approaching the harbour I followed the leading lights in. Paul was on the VHF radio giving his advice and with this I made a safe and much relieved return to Alexander Bay harbour. 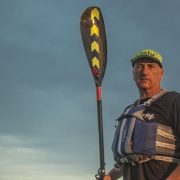 In December last year, filled with enthusiasm and the joys of life in the great outdoors he launched from a beach in Mozambique. His goal was to be the first solo-surfski paddler to paddle the entire 3600km South African coastline between Mozambique and Namibia. His purpose was to raise enough money to finance the reconstructive surgery that would enable 200 children to smile for the first time.

He didn’t make it!

During the planning stages conversations about the Herculean challenge ahead of him always seemed to wind their way back to the worst case scenario of a shark attack. The shark attack happened on day three of his paddle! A little rattled and more than a little anxious he put out to sea again in a replacement kayak.

Within a week of getting started the KwaZulu Natal coastline swallowed him up, worked him over and unceremoniously spat him out as a buckled man on a remote beach at the Amatikulu River mouth.

Mentally shaken up by the shark attack and physically damaged by the KwaZulu Natal surf, he gingerly put out to sea again. Hopefully, with a little physio at the next few stop overs the pain would subside.

Behind the scenes, with each passing day, word was spreading about Richard Kohler and his epic paddle for smiles. Despite the battering headwinds, shark attack and the serious punishment his body was taking he soldiered on.

Slowly, one kilometre at a time, with everybody’s support he was getting there. After three weeks he got as far as Winklespruit and then he suffered a knockout blow – the expedition was robbed. The low-lives that infest parts of this planet with their rot broke in and stole all the expedition equipment; safety gear, navigational equipment, radios, computers, cameras….everything – including irreplaceable photographs and video footage.

For all intent and purpose, Richard and Riaan had given it their best shot – expedition over!

Seconds out; round number 2.

On 14th October 2012 (yes, that’s in 10 days time) Richard will launch from Alexander Bay, paddle up to the Orange River mouth which marks the border of South Africa and Namibia. He will do a ceremonious U-turn and begin his epic journey all over again.

“I have no intention of giving up!” said Richard in his quiet, resolute way. “With the support I have received from family, friends and people I have never met, I am more determined than ever to paddle the entire 3600km South African coast line. Together, where each of us do what we can to make this expedition work, we will give the gift of a smile to 200 children.”