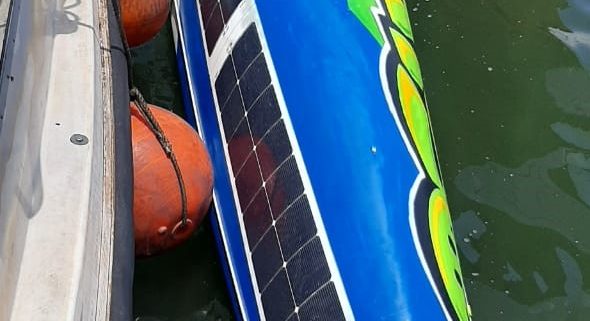 My first shower in 16 days was glorious. I was convinced that I had started getting a bit of a tan but much to my disappointment it seemed to wash away down the drain.

I am trying to scribe this blog sandwiched between white 1000 count Egyptian cotton sheets with soft fluffy pillows. All very surreal and a little eery with everything still and quiet.

My eyelids feel like lead. My brain feels like a television screen without reception. That snow pattern. I fell asleep twice before accepting the blog will have to be completed tomorrow.

14hrs later I return to the world with many questions needing answers.

The day and night before arriving was intense. The wind had increased with the forecast suggesting gust of 40knt. Not something you want to hear when you thought you had reached your limit already.

Maverick and Goose had finally crashed and burned. Flown their final hop.

I was left to steer through the night and then some more. That’s a tough ask normally but when the waves are breaking over the stern and the white water pushes over you back and head and floods the cockpit it’s an impossible ask.

Chris Bertish encourages you to change the impossible to “I’m Possible” and with little options I followed his lead.

I build a lot of character that night. I swore at myself. I crapped myself. Gave myself a long lecture and made all sorts of promises about “never again” and so on. It’s buried someplace in the back of my mind where it waits patiently until that moment it jumps out and shout “TOLD YOU SO”

One moment when I thought things might not end well was when a thunderous wave smashed into Osiyeza shoving her forward. Her nose started to drop and drop. It felt like we were tipping over the edge of a precipice. Instinctively I pushed myself into the seat as far back as I could. Not that this would make any difference.

Down the precipice dropped Osiyeza in the pitch dark.  Water spraying outwards from the bow. She was surfing down the face of large wave.

What lay at the bottom for us I did not know? Where we going to nosedive or pitch pole.

I did not know. Thankfully nothing untoward happen.

Osiyeza has a massive amount of bouncy in the bow and she took it all in her stride. I could feel that she was a little disappointed in my lack of faith in her, but she earned a bucket load of respect from me right there and then.

Mercifully the conditions calmed down relatively quickly. Had it not I would have needed to deploy the sea anchor which I had prepared the morning before in anticipation of these conditions.

By daybreak I was so tired I could hardly function but when daylight hits the retina the body somehow flips some switches, and you are alert again. The body is quite something. Sure, this new alertness does not last terribly long but it certainly makes a difference.

By now I could hear the waves breaking on the beach to my right but could not see the shore. There was a light haze and visibility was less than a mile.

We had set up several contact schedules through the night with the shore team. The challenge for me was I needed to be in the cockpit steering when usually I am inside for the communications.

The problem with being outside, besides having to use the phone in a waterproof pouch is that I am sitting right in front of the satellite antennae. There are warning stickers all over it indicating that a safe distance of 1.5m must be kept from it when in use.

Not sure how much of my brain I nuked but on the bright side perhaps the “told you so” bit has been erased. 😉 I know some might argue there was not much to nuke anyway. 😎

As I got to Pelican Point, which is the Harbour limit, I spotted a boat coming my way. It was Ciske one our Namibian surf ski friends. They had come out to tow me into the harbour. What a relief it was to finally arrive in Walvis Bay

The seven days since changing the “Go West plan” to “Go East self-rescue plan” have been the most challenging that I can recall. I know it’s not saying much because I am so forgetful, but it was truly physically and mentally tough.

First is to do the official paperwork.

My 16 days if self-isolation apparently does not count so I need to go and get a PCR test and if negative I can clear in with customs and Immigration. 🙃🤣

As for Osiyeza I am trying to formulate the quickest but best plan to get her ship shape and back on route towards Brazil.

Bird of the day: Flamingo. Lots of them in the shallows around the yacht club.
Position: WALVIS BAY