Around 2 am the previous night the fickle wind picked up from the Northwest. Obviously, the direction I want to go! Along with the SW swell the sea was like a schoolboy band trying to march for the first time. Hands and legs with minds of their own. Nothing coordinated. This made life inside Osiyeza rather uncomfortable. Waves and swell from all directions.

An hour later the AIS alarm starts screaming for attention…a cargo ship has strayed into my safe zone, and it looked like this one was on track for the bullseye. I tried to call them over the radio, but I am sure they were all asleep or watching Netflix. Who does that?

It’s a helpless feeling trying to paddle out of a ships path in the dead of night and no matter how much effort you put in the bearing remained the same. Put simply – we were on a collision course.

We passed each other with enough room in the end.🤏
How much is enough room you ask? In this case more is better, but I’ll take not getting Osiyeza’s paint job scratched as a sign. 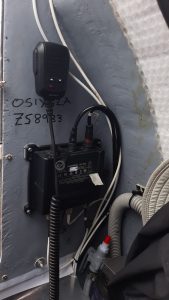 The magic black box, my AIS. Thanks Seaport Supply.

Feeling a bit worn out from the interaction with the bulk carrier and the messy sea pushing me the wrong direction so I decided to try my sea anchor for the first time. To be more accurate it’s a series drogue.

A conventional “sea anchor” is a marine parachute. A para-anchor. You set it in the water at the end of a long line attached the bow of the boat. The parachute fills with water, instead of air, and slows the boats downwind drift while keeping the front of the boat facing into the oncoming sea and wind.

A series drogue is many small cones attached to the long line at regular intervals. The area of all these cones is like the area of the parachute anchor but it has a few advantages. The main one being it has a lot smoother action on the boat. A single large Para-anchor tends to open and close from the pull of the boat and the stretch in the line making for quite a jerky action. The Series drogue spreads the load all along the line.

The deployment went as well as can be expected. And in 15 min I was in my bunk. I stayed like this for only two hours when the wind vanished. The drogue worked pleasingly well. Bringing it all back on board I may need another practice run but nothing got hooked around the keel or rudder so a job well done.

What’s a great way to start a new day on the ocean in a small ocean crossing Surfski?

Why Bacon and eggs of cause.! Freeze dried B&E!

I set up the spare cooker in the galley. When I say galley (kitchen) think a single piece of plywood 400mm x 15mm wide. Luxury.

Egg powder and water. Let it soak in the pot for a bit. Light the gas and in two ticks its cooked scrambled eggs. Same thing with FD cubed bacon only fry in a bit of olive oil. 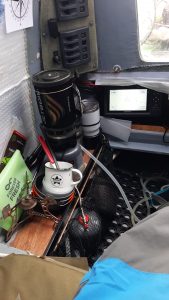 What’s next on the agenda.

I have a daily 08h00 Zulu schedule with Router Rob to get the low-down of mother nature’s plans and what the best path for Osiyeza is for the next while.

Flat and calm all day. So easy paddle West was what I did until….guess what direction she blows? Yip 🙊

At first with the ocean so calm and flat I got to see close hand all the creatures floating about. No trash spotted yet.

Portuguese men of War by the hundreds. Some with their blue stinger pulled tight to their underside as if the water was ice cold and others showing off with it dangling way below them. I guess those reasons might not be accurate but descriptively accurate. Maybe one is feeding and the other not?

The other jelly fish look like a small round plate with green/ blue frilly edges and many legs. Half a plate stands erect in the middle acting as it’s sail. It reminds me of a Gary Larson cartoon with the amoebas.

At midday when the sun is highest, I switch on the water maker. It’s one of the highest power consumers on board but with full sun the batteries stay at max capacity.

Not a cloud in the sky for most of the day. I need to be a bit more careful of the sun. Took a bit more than I needed today.

Two days before I left, I noticed a crack on my Garmin watch screen. Not much I could do to get it repaired so I super glued over the crack keep any water out. Today it started cycling through the menu screen without stopping. Besides being a nice watch, I use it to see my speed when paddling as there are no instruments outside. Bugger!

Just after midnight the SE wind arrived. Getting up to 15 knots but when day broke it settled around 11/12 knots. These winds strengths Osiyeza and I both love. Nose down and off we go. Even without my help Osiyeza enjoys keeping the averages high.

Day 6: On Autopilot
Scroll to top