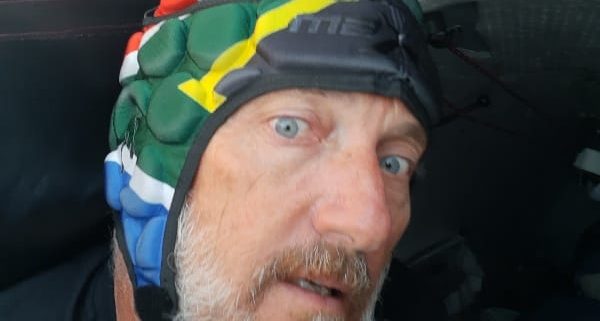 The forecast was for 20 to 25knt SE wind. Back at home we would be jumping for joy and arranging the car shuffle for a downwind paddle on our Surf skis.

Out here it is a little different. I need to keep crossing the wind and sea as much as humanly possible to get more East and that human limit understandably and regrettably is getting less and less as the days of executing my “Self-Rescue” or Plan B take its toll. 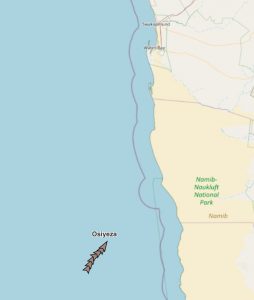 I’ve had a good innings but at midnight I opted to toss the sea anchor over the side and then get some rest. The sea anchor deployment was an utter shamble. How could I have messed this up so spectacularly? Half the drogues were hooked up and facing the wrong way. Offering no help to the cause.

I decided not to muck about in the dark and left it as it was. There seemed to be enough drag to keep Osiyeza facing into the breaking waves. “Well done chap” I thought. Now it’s time to sleep. Oh, how wrong was I. It was like Osiyeza was being stung by a swarm of wasps. She was lurching from side to side, up and down seemingly in panic, without a moment of calm feels like being on a bucking bronco. 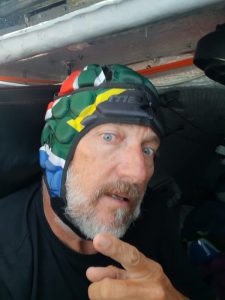 I must have managed some sleep because I felt a lot better by the time day broke. Conditions have not changed, and I stayed on sea anchor till about 10h00 when I decided it was time to make another push for Walvis Bay.

But first I needed to bring the sea anchor back on board. It was not as tricky as I first thought it was going to be. Yes, there were lots of lines and drogues in the cockpit but all in all a smooth operation.

Now to secure the bridle line and get going again. Oh no, it’s underneath Osiyeza! I thought I had planned by making the bridle float, but it turned out to be as useful as one of Baldrick’s cunning plans in The Blackadder series.

When it Osiyezas bow rode up and out of the water the bridle would drop down and under the hull. It would indeed float but hard up against the hull and no matter what I tried to do I could not get it to float forwards so I could yank it onto the deck and out if the water.

I eventually accepted that I would need to take a dip and push it up onto the deck by hand. Moments later wearing only my harness around my waist I slipped over the side and into the deep blue ocean. I thought the water was surprisingly warm.

The harness tether was attached to the side grab line and slid forward as I pulled myself along it. At the bow I flipped the bridle into the correct position and pulled myself back to the cockpit. At this moment a breaking wave barged into Osiyeza and over my head. I was not prepared for the force and push that wave had. I ended up holding onto the grab line with an outstretched arm giving my best superman pose. I had sincerely hoped that the adrenaline rushes were over for the day.

With that big messy sea, I managed to perfect the use of the black bucket inside the cabin. Who said you can’t teach old dogs’ new tricks?

Quite a few fishing boats in the area which always reduces the chance of good sleep with the AIS alarm chirping with a variety of details from DANGEROUS TARGET FOUND to LOST TARGET SIGNAL etc. 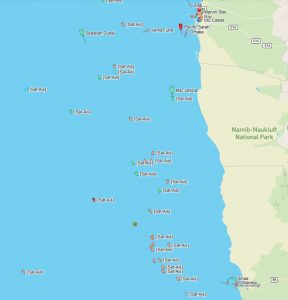 Bird of the day: Wandering Albatross. Such a huge, majestic creature working the pressure waves created by the moving swell