When I finally had the time to take it all in and reflect, I had paddled 310km in 38hrs and had not slept for 47hrs. I was knackered but still brimming with pride as the last remnants of adrenalin had subsided and the warmth of it all had set in.

As part of my preparations for my solo Ocean X mission, it was a no-brainer when I decided to undertake my own virtual version of the Ultra Paddle. Cold doesn’t begin to describe how I felt during this paddle and the lack of sleep induced some vivid hallucinations during the final seven hours of this challenging adventure. All I can say is thank heavens for coffee and hot soup!

Experimenting with different concepts is vital for success when planning an adventure. Often the simplest idea is the best. I started at 2pm on Friday at the confluence of the Dwas and Whittle rivers. It had been 11 long months since I had been here last, which was also a source to sea trip but on a stand-up paddle board.

The first section to the White Bridge is narrow and fast flowing with a number of short rapids guaranteed and tree blocks to get the adrenaline flowing. The water level was manageable but still low enough to run aground if you took the wrong line through the shallows.

I had brought along an extra mobile phone to use for social media updates but there was no cellular signal and I only once managed to get a Vodacom signal around Robertson. The other mobile phone was to run the SafeTrx app, which enabled friends and family to track my movements.

The navigation app was meant to assist in choosing the correct route during the night, but with different options being only a few meters apart, the weakness of my cunning plan quickly became apparent and I was often fighting my way through the trees in unknown channels. Once in the Bontebok section the app was mostly useless, which I think was due to poor GPS signal of the phone.

On the Wyzersdrift section I had hit a bollard on a low-level bridge and gashed a 15cm hole in the hull below my feet. I was frustrated with myself for taking the wrong line and while mentally giving myself a telling off, I took another wrong turn and ended up in some random flooded channel blocked by more trees. No time to dwell on mistakes. Just dust yourself off and paddle forward!

At Slanghoek low-level Bridge I examined the damage and used duct tape to make some repairs. In my early days of paddling I would tear off a single strip of tape to cover the hole. The first scrape over any object would peel the tape off and I would have to repeat this multiple times to get to the end.

A few years ago, while doing a previous source to sea mission, my good friend Ralph showed me the fish scale technique. Starting from the tail side, you place little square pieces of tape. Each one overlapping the previous one as you work your way forward. Any scrapes thereafter may cause the first square or so to dislodge but not the whole lot, which eliminates multiple stops for repairs.

It started to get dark as we approached the finish bridge of the Wyzersdrift race. From there to the N1 bridge is a short 4km section but is completely blocked with trees. It took ages to wade through in the dark and visibility was a challenge – even with a torch the steam rising from the water into the cold air made for tough navigation.

The flat land above Nekkies resort was straight forward as the flooding waters had receded back into the main channel. I chose to shoot weir and it was just a nice big wave train but I did get a good soaking. Alvies Bridge was going to be the next stop to have a much-needed hot cup of soup to restore morale as the temperature had already dropped to almost zero.

About 19 km later at La Chassseur Weir I stopped for another cup of soup, because it was getting unbearably cold. My fingers were numb and I could not even tear open the packet, resorting to my teeth to open it in nervous anticipation of warm nourishment of the welcome soup.

At Goree Weir, the channels were relatively easy and the big wave trains on the way down to the pool certainly got me joyfully bouncing in the dark. Unsure of the water level in the Silverstream sneak channel I decided to portage the low-level Bridge.

This was a very good decision as the water was just over the bridge but the Blue Bollards were still sticking out and a simple slip-up would have been the end of the kayak. The S-bend at the bottom of the channel into the Silverstream pool was over so quickly and without any drama. At the Weir below Silverstream I managed to sneak over the far right-hand side without portaging.

By the time I approached McGregor bridge, which is the start of the Breede River Marathon, It was just after 4am in the morning. An egg, cup of coffee and a freeze-dried meal was welcomed with glee and I was set for the rest of the day.

After more than 24 hours of no sleep I was pleased to find that I was still mentally lucid. During the cold and dark times of the night I was struggling with simple mental tasks like trying to figure out what the distance to the next point would be and even basic maths. As soon as the darkness faded into light my brain seemed to wake up again and function normally.

The next stop was Bonnievale Causeway. I had had company in the form of Peter, who decided that after 146km and one night of paddling, it was time for him to say his goodbyes. It was wonderful to have some company for the first section of the river, but now I was on my own and paddling the second half of the Breede River Marathon race and the first of many big long flat sections.

It was all plain sailing for a while. Waterfall rapid was just a small wave train offering no real challenge and then the many long flat pools had to be crossed. Surprisingly, it went relatively quickly but I guess I was running on autopilot.

Popping over Swellendam weir and going under the N1 bridge was a good moment knowing that I just managed to claim 200 km. I had a short stop at the Bontebok National Park to redo some duct tape repairs. Getting out and standing up was now becoming quite a struggle.

I was now chasing the setting sun. One of the sections I did not want to do in the dark was the channel after Hole-in-the-Wall rapid. At Hole in the Wall I managed to navigate my way down the far left-hand side without too much drama and very shortly after that was up my dreaded channel.

As I made my approach, I decided that the water level was high enough to try to sneak to down the far left-hand side to avoid the channel completely. Good choice. No drama. It was now pretty much pitch black. There was also no signal in this part of the valley, so if anything went wrong I was on my own until I climbed out and found cell phone signal.

Sometime during the night, I realised I had completed the first goal of the expedition, the Ultra Paddle, a 240km virtual Berg River Marathon in aid of Canoeing SA and the #canoeing4covid food relief fund.

The flashlight’s maximum range was about 2m and the headlight was even less as the fog began to thicken. I was now mostly navigating by sound making sure that the boat was following the flow of the water and not to get caught perpendicular to the stream, risking being washed upside on to a rock.

This would have ended in disaster as the boat could wrap around the rock and be destroyed or worse, leaving me pinned against the rock. I knew once I got to the end of this section, I would be in the clear with no more rapids left to contend with. It was with less than 1km to go to this safe point when disaster almost struck.

Suddenly a massive whirlpool appeared beneath me, instantly spinning the boat 180 degrees and as quickly as it appeared it vanished but was replaced with a huge surge of water that pushed the kayak sideways into a tree stump sticking out of the river. The kayak wedged hard up against the log.

Instinctively I leaned the kayak towards the log stopping it from flipping upstream. I managed to get one good push with my foot against the log just as the kayak was starting to crack and fold. As the kayak moved backwards, the upstream rail dipped in the water, flipping it, but also same time dislodging it from the log.

I was now floating downstream next to my kayak, soaked to the bone and rattled mentally. Happily, I paddled into the flat pool a minute later and I realised that I had past the worst of it and now only had 65km of flat water remaining.

The following stretch of river to Malgas was uneventful besides the tall trees along the bank started to look like cartoon characters in the contrasting light of the stars. At Malgas I managed to get a cup of soup into my stomach. I did not stay long as I wanted to keep moving before my body shut down completely. By this time, I was not able to stand without assistance and walking was not a very pretty sight!

The final 35km to the sea was purely a mental battle. The hallucinations from lack of sleep were coming to the fore. At some stage I realised that I was paddling into the incoming tide and decided to stay close to the left-hand bank to stay out of the fastest flow. Being so close to the bank my head torch could light up the rocks and trees and all these turned into fantastic creatures.

I spent many hours muttering to them and asking them things like “how far to go” and “am I going in the right direction”. They never did answer but quietly cheered me on. At one stage I ran aground on a rock from which I could not push myself off, so I tried to stand.

I ended up falling into the river and thinking that if I don’t get back on to this kayak right away, I will end up floating in the river forever. Not one of my new animal friends bothered to help me. I stopped talking to them after that!

After many attempts I got myself back into the kayak and realised that the grounding had dislodged the duct tape repair and quite possibly a kayak was now going to take in a lot of water but I was in no physical or mental state to do anything about it.

When I eventually made it to the finish line I could no longer manage to stand. Paul had to manhandle me out of the kayak and literally carry me to the vehicle. The kayak had filled with so much water that they could not get it up the slipway. After 38hrs of paddling 310km and 47 hours of no sleep, I had successfully completed my goal. 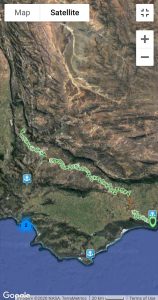 Weather, winds and route to Brazil
Scroll to top