Blog - Latest News
You are here: Home / Blog / On the road again

In the words of Willie Nelson

Monday morning, I received the message I had been waiting for along with a picture of a trailer licence disk. It had taken four days to get the SA traffic department admin sorted to get the trailer through the border.

Eight hours later they crossed into Namibia and started on the long straight roads via Windhoek and Swakopmund. They had an overnight stop and early the next morning their bakkie tyres were slapping the tar again on route WB. Seeing them at the Walvis Bay yacht club was a wonderful moment. A moment of relief and a “Yes I am now making some progress”.

After a week finally things are happening.

Loading Osiyeza onto the trailer turned out to be more of a challenge than anticipated. The tide was unfortunately low, so it was not a simple case of floating her onto the trailer and tyres. In true Namibian style people came out of the yacht club and waded into the water to lend a hand. We all pushed and pulled Osiyeza up and onto the trailer as far as we could.

Once we had the trailer in the parking area the final placement was done by reversing Osiyeza against the edge of a 20′ container and sliding her the final few feet up the trailer. She was tightly and carefully ratchet strapped to the trailer before headed off to Swakopmund where we had been offered a house on the beach for the night. Osiyeza stayed safely behind locked gates at John Woolf’s workshop while we refuelled at a local German restaurant. 🍻🍖 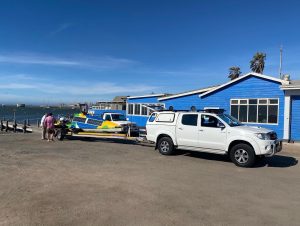 06h00 and we were on the road again. The outside temperature for most of the trip was 35-39° C and even thought the air-conditioned struggled I was very grateful that it was as good as it was. We overnighted in Noordover at the border. 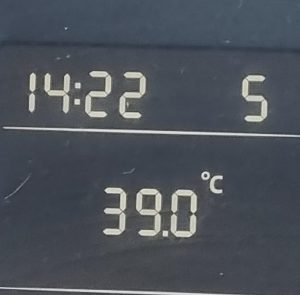 I was quite concerned about the border crossing and the red tape that would be thrown at us for Osiyeza. The red tape involved with putting her on a truck was stupendous and that’s why the plans changed to driving her out ourselves.

The Namibian side hardly batted an eyelid. I did manage to get a handwritten note saying that Osiyeza had crossed the Namibian border along with a Customs stamp.

Next was the South African side!

First bit of business was to get our nasal passages violated again for an Antigen test. I wonder what would happen with a positive result. We passed with flying colours. Felt a bit like today’s youngsters getting an award just for participation. 😂

After Immigration I popped in to see Customs and to declare Osiyeza. I had my Customs documents from my departure. I handed them over and received a blank and bewildered look. Their reply was they don’t have any documents for this so just be on our way. 👌 Thankfully all my angst for the border crossing had been for nothing. The final border inspection was a curious policeman wanting the scoop on Osiyeza’s design and the crossing.

Seven hours later we arrived in Cape Town at Atlantic Suzuki, Kevin’s business, where Osiyeza spent the night.  In the morning we lifted her off the borrowed trailer.  A block and tackle on one end and a forklift at the other we placed Osiyeza comfortably back on her own trailer. 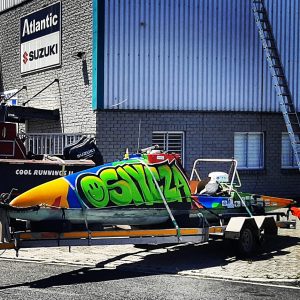 Osiyeza finally came home with me. I spent the next day removing everything and giving her a good wipe down inside and out. I had hoped by now the Maid could help and take over but there is still no sign of her.

While doing the clean-up I noticed a salt build-up around one of the bolts holding the rudder mounting to the transom. I suspect that the water that had leaked into Osiyeza and caused the solar problem had started to run out on the road trip back. The high temperature evaporated the sea water leaving the tell-tale salt behind.

A pressure test will be done to confirm if this is the only leak. 💦

Ralph kindly took Maverick and Goose for a debriefing. He picked up a few issues and we will be addressing them as soon as we can.

Osiyeza goes for her surgery in a few days.