Driving to the beach this morning I checked up on the weather forecast and was a little shocked to see it had changed a lot. It had changed to headwinds from early morning! Not what I wanted to see.

Anyway the surf and shore break was small enough not to cause any issues. Craig joined me again and we headed off at a good good pace just more than 10km/hr. The sea was glassy and the wind had not yet shown itself but on the horizon was one of those classic black clouds that stretch from left to right and slowly moves closer and threatened to block out the sun. 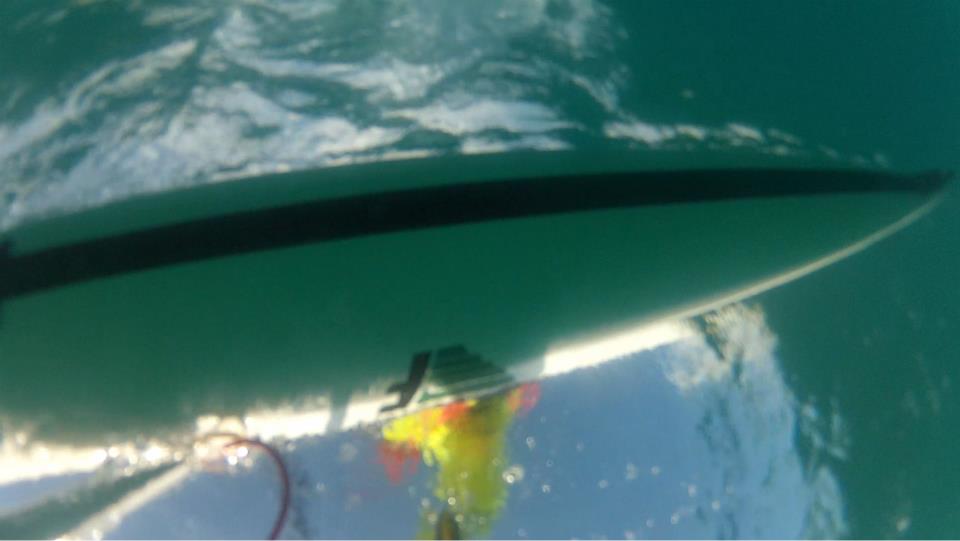 The first hour was a pleasure and I spent much of it admiring the coast line which is covered in Cascadia trees. The Richard Bay Minerals (RBM) mine that eats up the coastal sand dune, takes out the fancy metals and then builds the dunes back up and plants the trees again is quite an interesting operation. I am not up to speed on the environmental aspects but to the novice eye the reconstructed dunes looks pretty good covered it vegetation/ trees etc. It was just before the main RBM mine that things started to change

The NE wind started to puff which retarded our progress somewhat. Craig managed to lose most of his juice and was starting to struggle a bit. We were nearing the stop over point on my first attempt where I broke my spare ski in half. At this point I could see the outline of the Jolly Rubino wreck which meant we were making some progress. It was around here at the 20km mark that Craig said he was not feeling well and that he was going to turn around and paddle back to Nhlabane. I tried to convince him that it was only 15km to the end but hammering into the wind was not doing him any favours. He headed off after asking me to call his office and get someone to fetch him. I said I would as soon as I had reception. That only happened just before Mapelane.

It took me quite a while to reach the wreck as the wind had increased and the current had started playing dirty. I was only managing to move forward at 6-7km/hr and trying to stay close to the back line I had to be on my A game not to be smashed by the rouge waves. I think trying to stay away from these waves kept me busy and before long I was outside the reef at Mapelane.

Having had a look at the reef on one of our off days I knew where to come in and slipped to the beach without a hitch. Mapelane is about 3km south of St Lucia but I chose it for the safer launching site but the drive in is a long and slow route through the forest. About an hours drive from the N2.

We are staying in a tented camp curtsy of Brent Gonzales. A very very nice spot but you got to keep an eye on the monkeys and mozzies! The buck walk around without fear. The chap next door has seen two leopards already this year!

Just did this short leg to set up the St Lucia to Cape Vidal and to eliminate the need to take on the jungle drive into Maphelane.

We returned to Richards Bay to wait for a weather window and ended up sitting around for another 4 days. We moved on to St Lucia on the morning of the 12th and spent the day taking in the sights, spending the evening at the St Lucia Safari Lodge. Oh boy, to have aircon again. What a pleasure! The owner, Dennis, arranged a boat cruise on the estuary . We got to see lots of hippos, a nesting crock and the Giant Kingfisher. 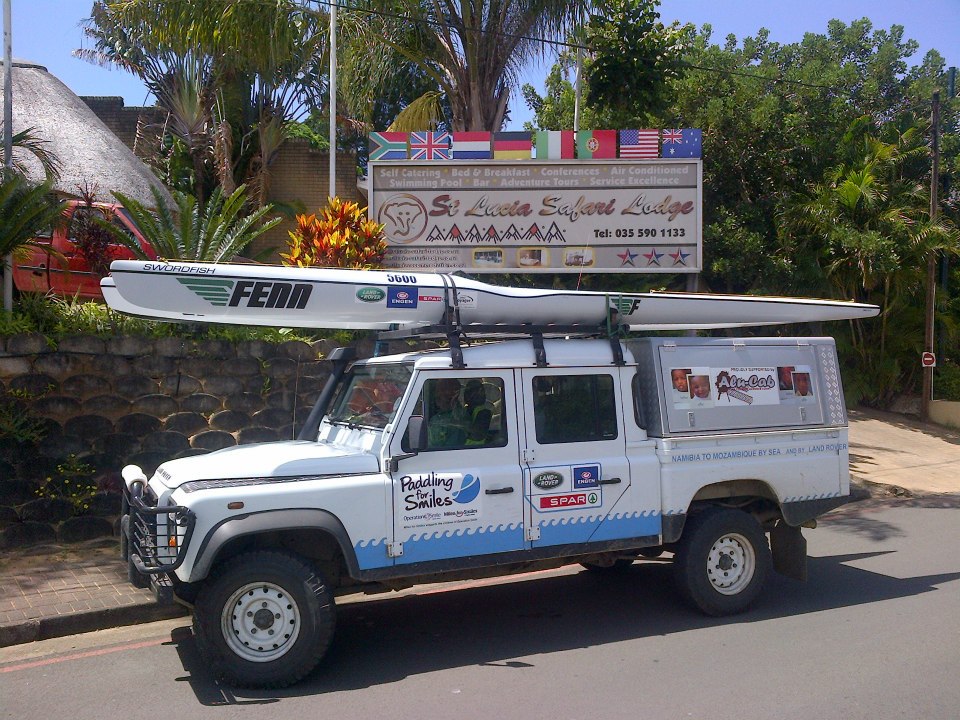 Craig came up from Richards Bay later that evening to join the next days paddle.

So it was back into the early morning routine to make the most distance in with the light head winds before the NE wind kick in and slow the progress. The surf was a reasonable size and carehad to be taken not to get taken out in the impact zone or these hollow waves could do some damage. I took a swim when I hit my blade on the side of the ski and it spun in my grip before entering the water. A silly swim but I had to then gather all my bits and pieces. My GPS clip has corroded to the extent that nothing but gravity hold it in place. My video camera is clipped on to the rudder cable by a cord and is pulled back on board like a fish. 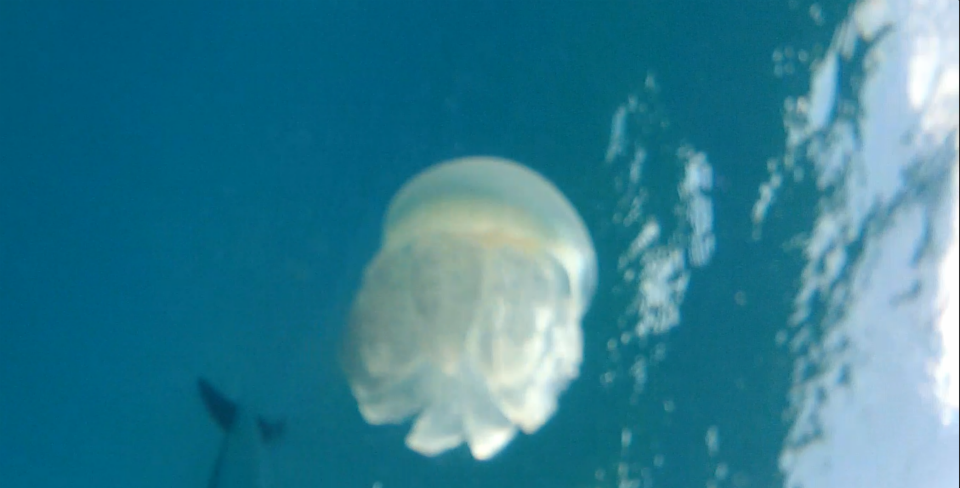 I spend about five minutes popping over foamies waiting for a gap in the surf and when it appeared it was still a long sprint to get to beyond the back line. So close to the end and the last thing I want to do is have admin issues in the surf.

The highlight of the day was having a few dolphins come and greet us. One of the few times that they have been sociable with me? Maybe they don’t like my black stripe?

My newly repaired VHF radio got a dunking in the surf and started acting up straight away. They are supposed to be 100% waterproof and designed to float etc. I think that the water integrity might have been compromised during the repair. So we are now down to one hand held unit and the vehicles unit. The new one I had to purchase does not charge so this will have to go back to the shop. Frustrating!

Having paddled into Cape Vidal before makes things a lot simpler. Paddle past the reef. Catch a wave and then duck behind the reef for protection. It was quite a odd sight to see a fisherman standing on the end of the reef but you can’t see the reef so I thought, at first, he was on a stand up paddle board. It is something I have learned – to get a proper idea of where to come in you must paddle almost passed, where you think it is best, to get the best perspective. When you are tired and just want to get to shore this is when mistakes creep into the equation.

Waiting on the beach with Warren was my 1st cousin, Jimmy and his wife Nancy. They were on holiday from the UK and drove up from Durban to meet me. It was the first time I had ever met them. How odd and great to meet them while on my adventure and here on this empty beach.

Last night we stayed at the Buya Futhi B&B in St Lucia. A three day weather window was forecast to arrive the day after so it gave us a chance to jump through hoops to get some admin issues sorted out.

We also now needed to stay in St Lucia for another day and Dennis had said that we are welcome any time to stay with them so we took him up on his kind offer.

The iSimangaliso Wetland Park was listed as South Africa’s first World Heritage Site in December 1999 in recognition of its superlative natural beauty and unique global values.

Having arrived in this part of the world I am now classified as an EVENT! I even have a permit to prove this. So we are now a canoe event within iSimangoliso Wetland Park. How cool is that???

It is a 35km drive to Cape Vidal and a speed limit of 40km. It did not really matter time wise as the wind was supposed to start increasing after 08h00, I say supposed to as it never got to it’s forecast strength. The wind was from behind but such a small amount that I was moving at the same speed as the wind. This is not a good thing as the cooling effect of the wind is now zero and it was a hot hot day with so clouds to shelter me from the sun.

I don’t remember too much of the day. My music player froze on me before the start so I had no music to help my mind which was getting cooked under my cap. I think I might have splashed my self with water every five strokes. Oh boy it was a tough day.

Just before getting to Sodwana I saw a purple Rapala bobbing in the water. It took me three attempts to pick it up. I was now very knackered and my right buttock had cramped up into a big knot. No amount of stretching could make it better. It was a bit like sitting on a big marble. Not lekker!!

I took three litres of my coke and water mix and another litre of water. I finished it all four litres before the finish.

Coming ashore at Sodwana is fairly similar to Cape Vidal but the surf was a little bit bigger. I was great to see some more friend to greet me. Ken & Romey Finlay are here for a 50th birthday and were on the beach with Warren.

We stayed the evening with Corel Divers in one of their en suite twin bed bungalows. I felt absolutely shattered from the days paddle. The thought of doing 85km the next day did not instil any comfort. Was the knot in my buttock going to break me tomorrow. I stayed with Corel Divers on the first attempt so many thanks for the continued support. Must go back and do some diving one day